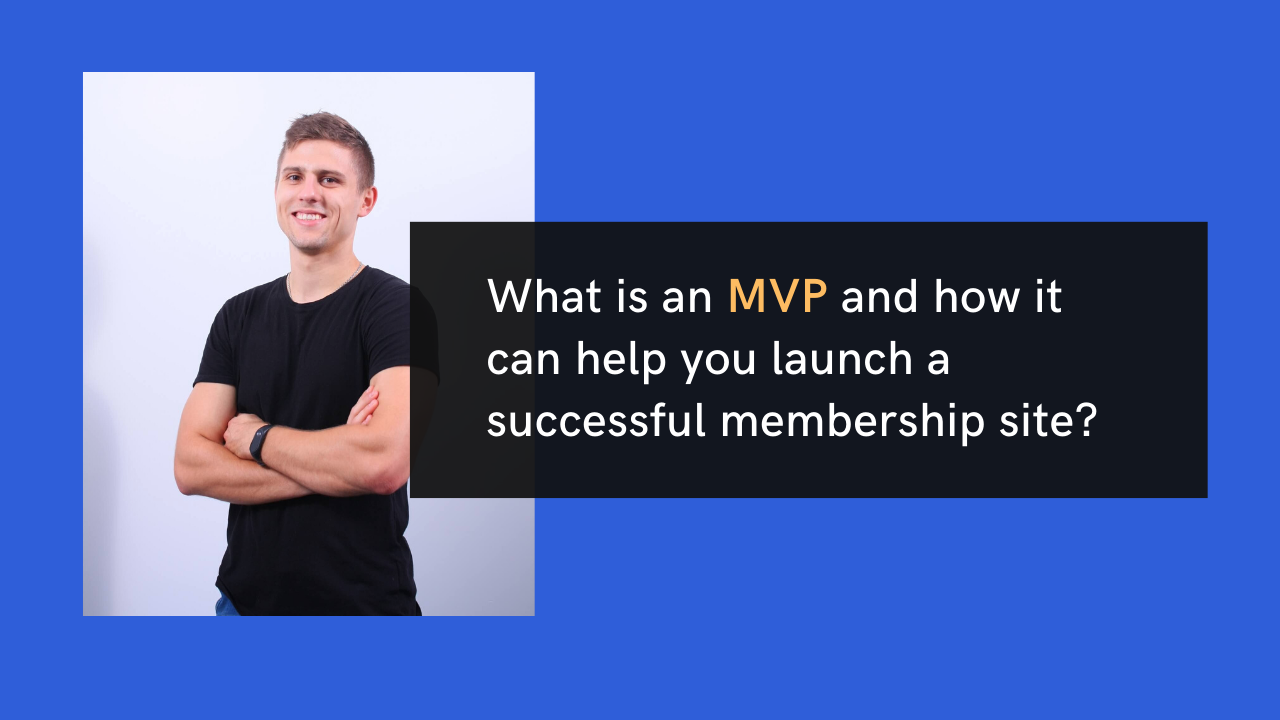 Building a complex membership website is not as easy as it sounds.

It requires time, effort, and experience.

And the worst part about it is that you don’t know if it will actually work.

This can be really risky, overwhelming, and stressful.

Do I need this feature?

What if my members don’t like it, and I’ve spent months developing it?

How do I know if this is really worth it?

These questions are not uncommon among membership site owners.

Many of my clients have similar concerns.

And not just them, I usually have similar doubts when I try to build something big.

They are natural and reasonable.

But they can also be so difficult to cope with that they can hold you back from executing and launching your membership idea.

What if there was a better way to deal with that?

What if you could reduce the complexity, decrease the time and effort that you have to put in, and make sure that your efforts don’t go wasted?

Well, there is a concept that can help you with that.

So let’s dive in and see what an MVP really is and how it can be useful to you.

What is a MVP?

It’s commonly used in the software world, especially among startups that are building complex products and want to optimize their time and money resources.

The idea behind it is very simple – you develop a simplified version of the product (or website in our case) that you have in mind.

This “stripped down” version should only have the main features of the final product, while leaving out the additional ones.

Let’s take a closer look at the following example to understand the practicality of MVP.

When should you use this approach?

To help you understand when an MVP can be useful, let me tell you a little fictional story.

Imagine that Jane specializes in digital marketing, and she wants to create a membership website to sell her digital courses to her subscribers.

Apart from that, she also wants to gamify her website and allow her users to earn points for every course they complete, and then use those points to get discounts for her physical products.

Now Jane basically has 2 options – to either build a website with all the features above and then launch it.

To start small with just the membership/course functionality and then build on top of that.

Let’s assume Jane doesn’t have any extensive technical or coding expertise, and she decides to proceed with the first scenario.

When it comes to WordPress, usually the more plugins that you use and try to make them work nicely together, the more likely you will run into issues.

The chances of her getting stuck and being stressed and overwhelmed with her website idea increase with the complexity of technology choices.

She will likely start doubting herself and will be even more stressed if she tries to combine too many tools made by too many different companies.

I’m sure a lot of you can relate to that.

Then, let’s say that she is finally able to launch her dream website either with the help of a developer who she paid or by spending a lot of sleepless nights herself.

Either way, she has spent a lot of resources to achieve her goal.

Then she launches her website and she runs it for a month or two.

People are purchasing her courses, but no one is interested in her physical products.

This reveals a big problem because she has essentially wasted a disproportionate amount of her resources to build something that people didn’t want to pay for.

What could have been changed about her approach to eliminate the issues that Jane encountered?

Well, here is where MVP can be very useful.

She could have only included the membership/course portion of the site for the initial launch.

LifterLMS + a basic WordPress website could have powered the whole thing.

Had she done it, she obviously wouldn’t have spent so much time and money resources on the website features that were not of value to her customers (at least at that stage).

She would’ve launched her membership site sooner, which means that it likely would have started generating money earlier.

She could’ve asked her paying customers what other features they would find useful.

Having that feedback, she could have spent her money more wisely to build those features.

These are the lessons that we can all learn from Jane’s story.

That’s why you should use the MVP strategy when you have a complex website idea in mind that you’re not sure if it will work, and you want to optimize your time and money resources while also decreasing the risk of failure.

This is basically a good rule of thumb.

If you have a similar situation, I would highly encourage you to at least consider this approach.

Now that we know when we should use the MVP strategy, let me now talk to you about the main advantages of creating a MVP.

The advantages of creating a MVP

However, there are some principles that are universal across all (or at least the vast majority) of the websites.

Validation of your idea

The first advantage that I would like to mention is validating your idea.

As you probably know, the brilliant idea that you have in mind is not always going to work.

You need to test it out to see if your members will find it valuable enough to pay for it.

This is why you don’t want to create a complex website that will take a long time to develop, because it will not allow you to validate your idea fast.

On the other hand, you can launch a MVP version much sooner, sometimes even in a few weeks.

Reducing expenses is a major priority for every business, especially if they’re in a startup phase.

One of the best ways that you can save some money if you’re trying to build a complex membership site is to start “lean” and small.

Building a MVP of your website is going to be cheaper (and in many cases A LOT CHEAPER) that building a complex one.

Starting with a MVP is a great way to keep your website flexible for future updates.

Once you have the main features in place and you’ve gathered feedback from your customers, it will be much easier for you to predict what additions you need to add to your membership site.

That’s because the redundant features might cause conflicts or will need to be removed altogether.

This will lead to spending more time for your developer (or yourself) and lead to higher costs.

Risk reduction is probably the most important benefit that encapsulates all the other advantages that I mentioned above.

When building a MVP, you will be able to start lean and not waste time and money that might end up hurting your business.

You will be able to validate your idea sooner with fewer resources required and modify or even abandon it if needed.

Summing up, I would like to say that we can all learn more about successful project management from startups in other industries and apply it to the membership/LMS industry.

Let’s try to use the best practices that other people have created to make sure our business is going to be successful.

So if you’re planning to launch a complex membership site, I would encourage you to at least consider starting with an MVP to save you time, money, and your sleep. 🙂

I hope you have found this article helpful.

Andriy is a WordPress Consultant that helps thought leaders turn their expertise into monthly recurring revenue with membership sites.

Send It To Me

Discover how much you can charge (no opt in required)

Get FREE access to the official WordPress LMS Buyer's Guide

Create and Launch an Online Course with WordPress

Discover how to launch your online course website in 20 minutes

Try LifterLMS Before You Buy